The loudest I ever heard God was on a train.

Alone in the open doorway of an empty railcar with my feet on the platform, waiting for the last train home.

From a distance I must’ve looked sad.

My longtime ex-boyfriend and even-longertime ex-best-friend were five thousand miles away, but also right in front of me. Their ghosts had followed me to London, and wouldn’t leave me alone. Haunting. Mocking. Sneering. Glad I was gone.

I lit another cigarette.

It had all happened months before. The painful, drawn-out breakups. First with him, then with her.

Losing one was incapacitating.

Losing both was catastrophic.

I was a fucking wreck.

Crying in secret. Or sometimes in public when the wind blew a certain way or the wrong song came on. Their memories sliced through me with blunt scissors. And I was a dutiful masochist.

(Not looking for sympathy, here. Everyone’s had a trampled heart. I’m just trying to set a scene.)

Bottom line? My well-being was drop-kicked and shattered. Splayed on the concrete at Liverpool Street Station, reflecting my very worst.

So that’s where my mind was that night. Grieving. Loving them. Missing them. Hating them. Cold fingers holding a cigarette, watching the clock, waiting for Christopher who ran off to get us a tea, my brain voice whispering things like:

You deserve being sad.

They were right about you.

And the same thing will happen with Christopher.

And that’s when it happened.

So how do I describe this.

You know when you use a walkie-talkie,

and you push the little button to talk

and your voice blocks out all other noise,

and you can’t hear anything until you let the button go?

My inner voice got muted like someone pushed a button.

But not a mean scream.

And it was LOUD.

So loud I jolted.

You must stop. You made some bad decisions for a short time, and that really is all.

Everyone messes up. Everyone. It’s all about lessons. For everyone.  Are you listening?

I nodded. By myself on that train car in the freezing cold I nodded.

You are loved more than you know. You have learned. And it will get better. It already is. Now no more.

The voice was IN my head, gentle but firm, and so very obviously not my own.

“What’s wrong, darling, you been crying?”

“Something just happened,” I managed.

“Tell me.” He swiped my cheek with a finger.

I accepted the tea, stubbed out my cigarette then told him.

(The second miracle is that Christopher stuck around.)

My healing began that night. And I remember it with profound gratitude.

Not for God’s existence. But for his Everywhereness.

I wasn’t in church and certainly wasn’t treating my body like a temple. But He was right there, privy to my pain. Loving me while I was quite incapable of loving myself.

(Note: I use the He pronoun for simplicity; that’s not really how I define things.)

So what’s the deal. Why am I sharing this.

1. Because this is what I write about: The Other Side.

And 2. Because last year my brain got noisy again.

Not in my personal world. But in the world around me.

And I’m about to switch gears, because how do I recap 2016 in a tidy blog?

Somehow, someway, the word pussy wriggled its way into a presidential debate.

and definitely not gay people.

I found myself on the defense for being white.

I scrolled past pictures of dusty, bombed Syrian babies and watched Mein Kampf grow a waiting list at the library.  A waiting list!

Remind me what planet we’re on?

And just when we were in the home stretch . . .

George Michael up and died.

I said it on Facebook and I’ll say it again. 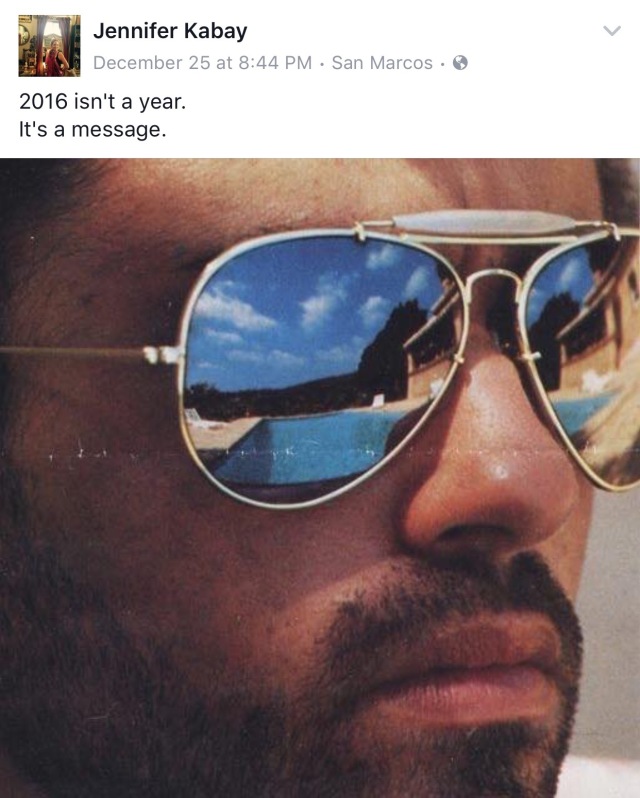 What the message is, I dunno. But it made me want to scoot my chair closer to God and listen to Careless Whisper on repeat. And also start writing a blog series about His everywhereness –something I’ve considered a very long time.

Because I never found him in a building.

(Okay, there was that one time.)

Mostly I found Him hanging out where I was.

Through  divine orchestration and intuitive nudges that wouldn’t go away.

But especially through people I met at just the right time.

Like my friend Emily, who writes about this stuff, too. Emily is the only other person I know (my age) who owns a kaftan. She also agreed to join me on my little God Tour.

And just yesterday when I thought maybe I shouldn’t write this — because hey– it’s personal, a complete stranger approached me and said “I just gotta tell someone.”

He was tall. Black. Homeless. A gentle weathered face like John Coffey in The Green Mile. And he smiled at me real big.

“I was so cold yesterday and feeling real low cos I didn’t have anywhere to go.” He closed his fists for emphasis. “I asked God to please help me. He guided me to a motel to get warm and stretch my legs and you know what? The lady there -I told her not to-but she ordered me a pizza.”

He started to tear up.

I recognize a message when it’s standing right in front of me.

“And this morning something told me to check my account,” he continued. “It was weird, you know? Because I haven’t had money for so long, but I did. I checked my account. And you know what? There was money in there. I couldn’t believe it. My old employer finally deposited some funds we been fighting over and now I can breathe. I can eat and get warm and I’m so grateful. God listens, He really does. Even though I’m homeless. I’m sorry, ma’am. Here I am, a grownup man crying. But I just had to tell somebody.”

So just in case

I had ANY doubt

I should move forward with this . . .

See you in the cracks.

Blursed lollipops.
Years ago I wrote all the Girls. I let them know how much The Golden Girls meant to me. Betty was the only one who wrote me back. ❤️
Thank you @eeedeewatson for this amazing prezzie! I ❤️❤️❤️ it!
My special order arrived at the library. 🥰
My bestest and only. ❤️
@hayleymills_official This is everything I want in a memoir. Thank you for sharing your story! Loved it! ❤️🙌🏻📚