I found THIS in a library book a few days before we left. 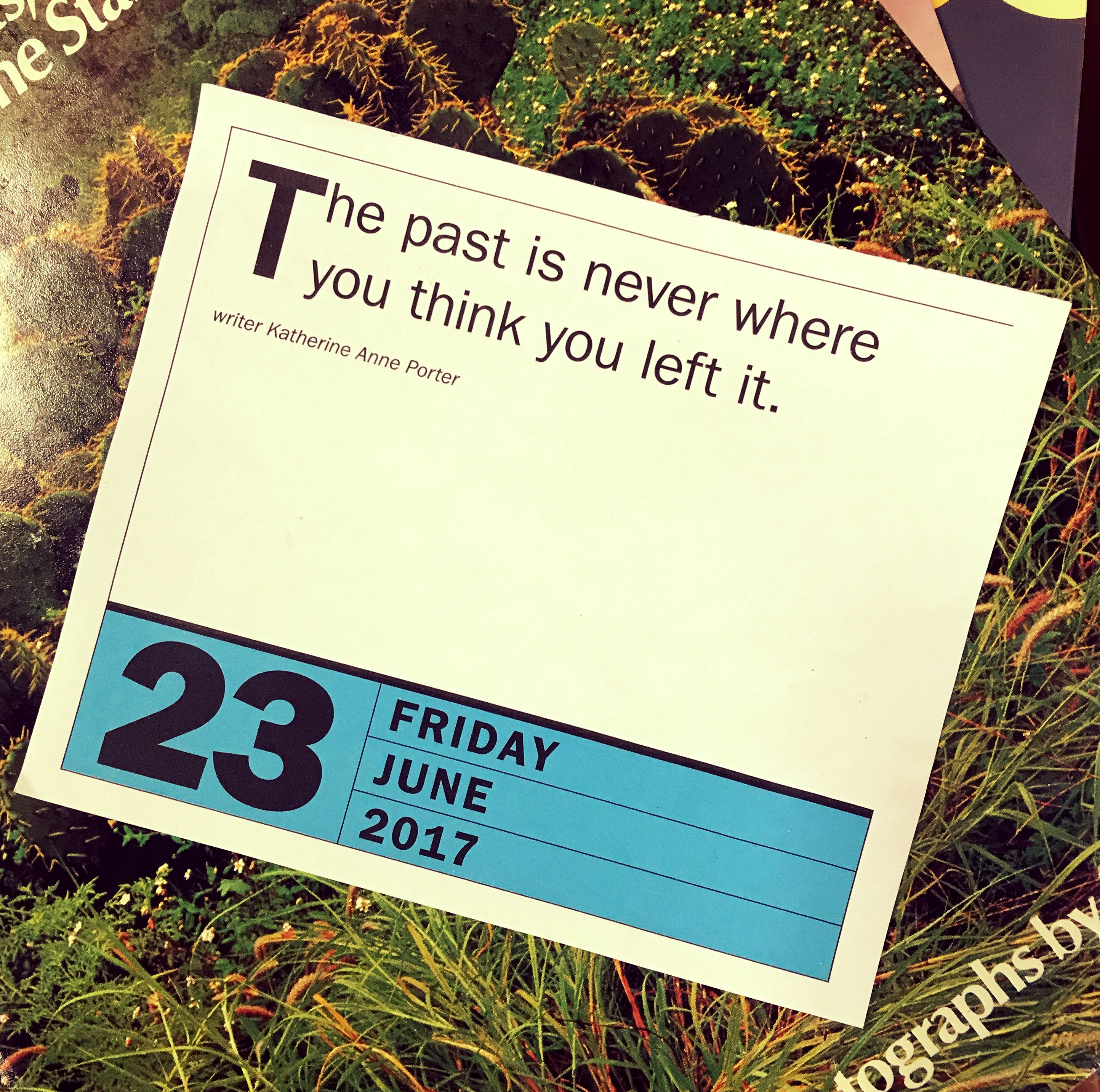 By we I mean me and Emily. Friend, fellow writer, and the only other chick I know with a selection of kaftans. 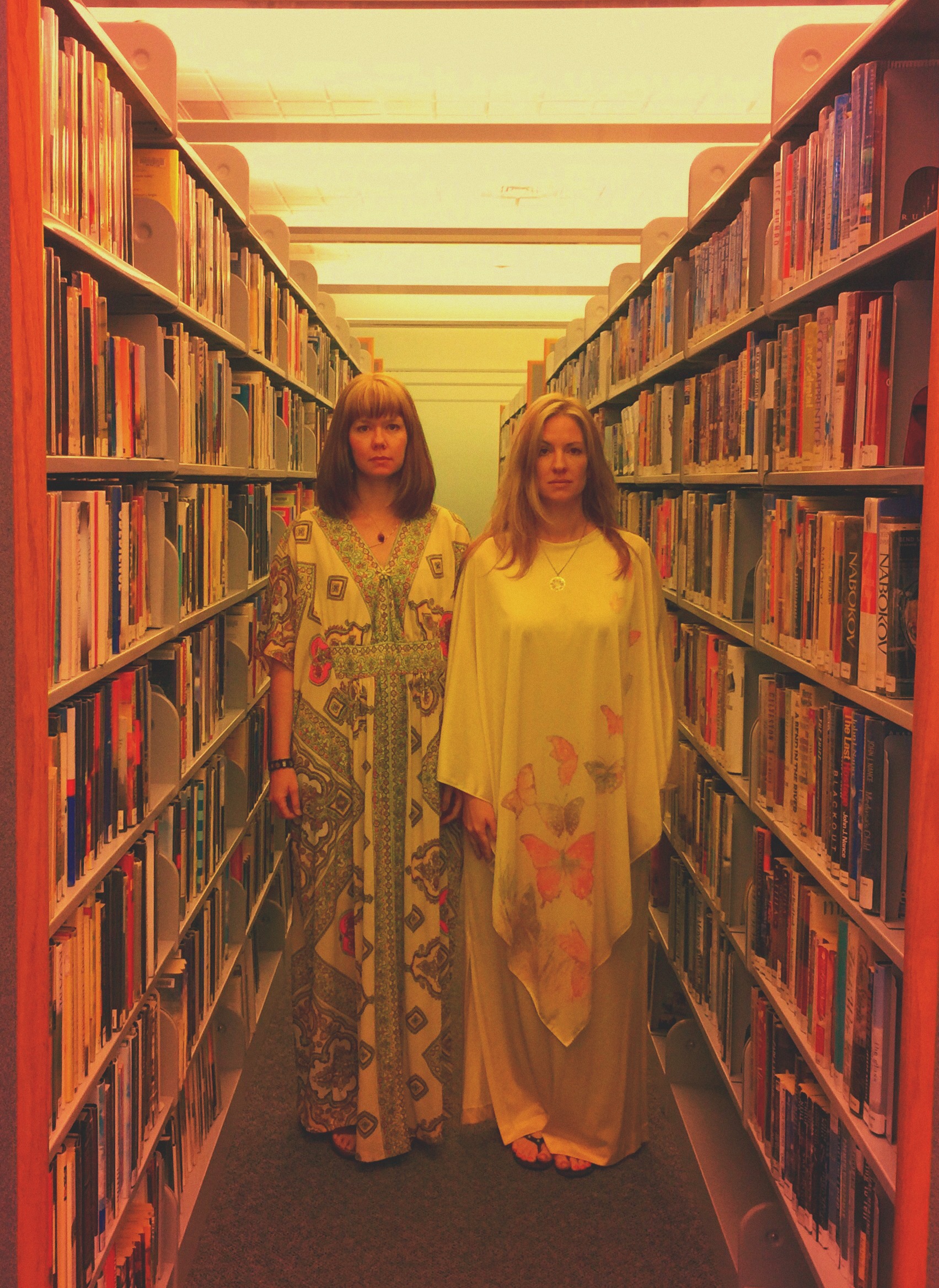 I find stuff in books all the time. And though June 23rd was already behind us, I felt it was some kind of message. I showed it to Emily who lived in New Orleans and knows about this stuff.

I also learned (according to voodoo practitioners) the spirit world comes closest to the living on St. John’s Eve.

So Emily and I drove to Louisiana with high hopes and fun outfits. Real-life hauntings are fairly rare, but the Myrtles is generally agreed (among paranormal professionals) to be legitimately haunted.

Are we the kind of dorks that prance around plantations in kaftans? 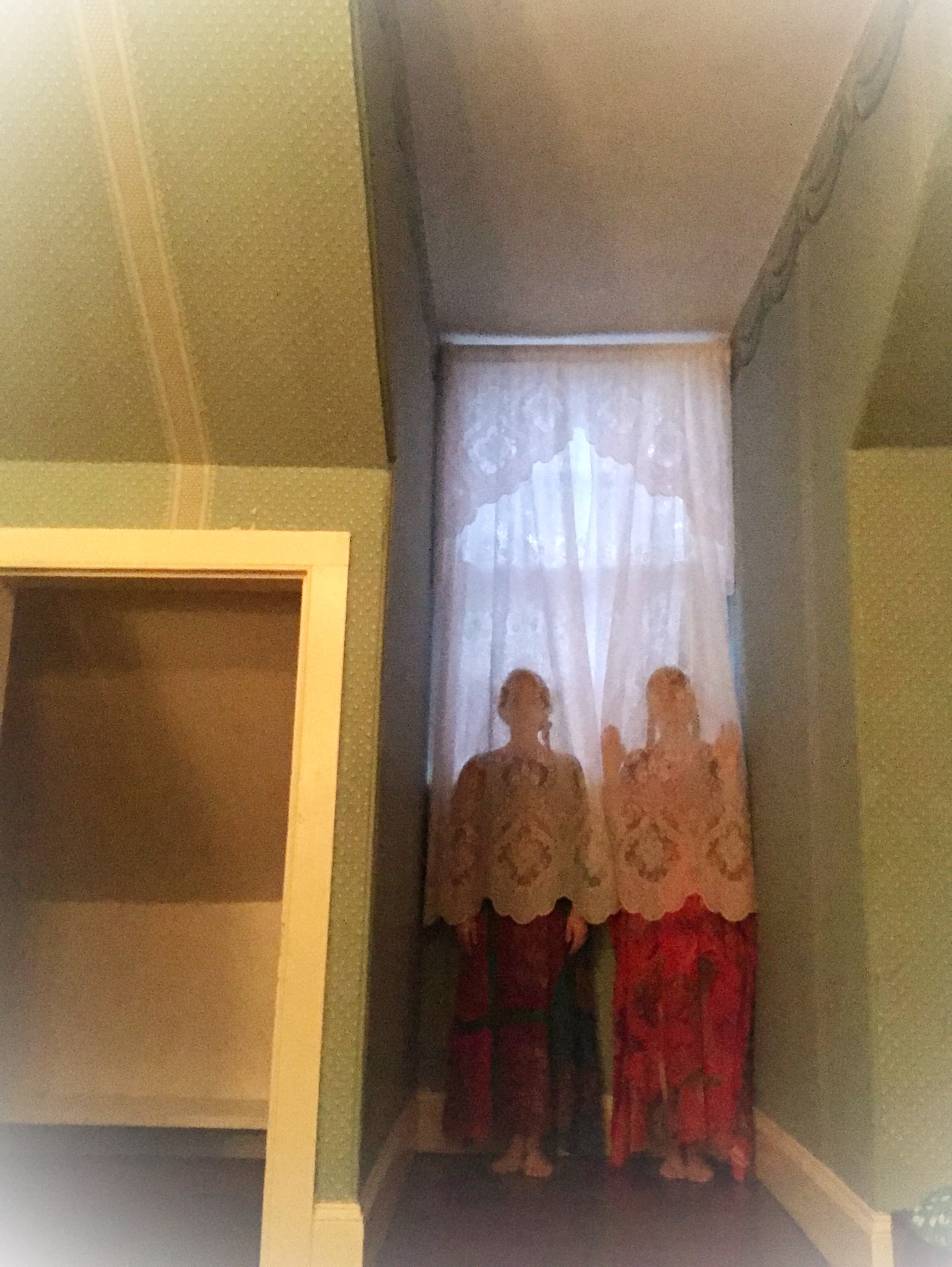 We chose the Fannie Williams ( A.K.A Doll) Room because it looked the creepiest online. I mean, who doesn’t want to sleep next to a frozen porcelain child?

I expected to be blasted with feelings upon entering the property, but that wasn’t the case. I will say the grounds and surrounding wooded area felt charged in that static-y way prevalent in ‘haunted’ places. But if I feel that in open air, it probably has more to do with the land than the house.

If a house is built ON that land, then certain rooms will be susceptible to that same crackly energy, spatially consistent with whatever’s happening outside. Does that make sense? 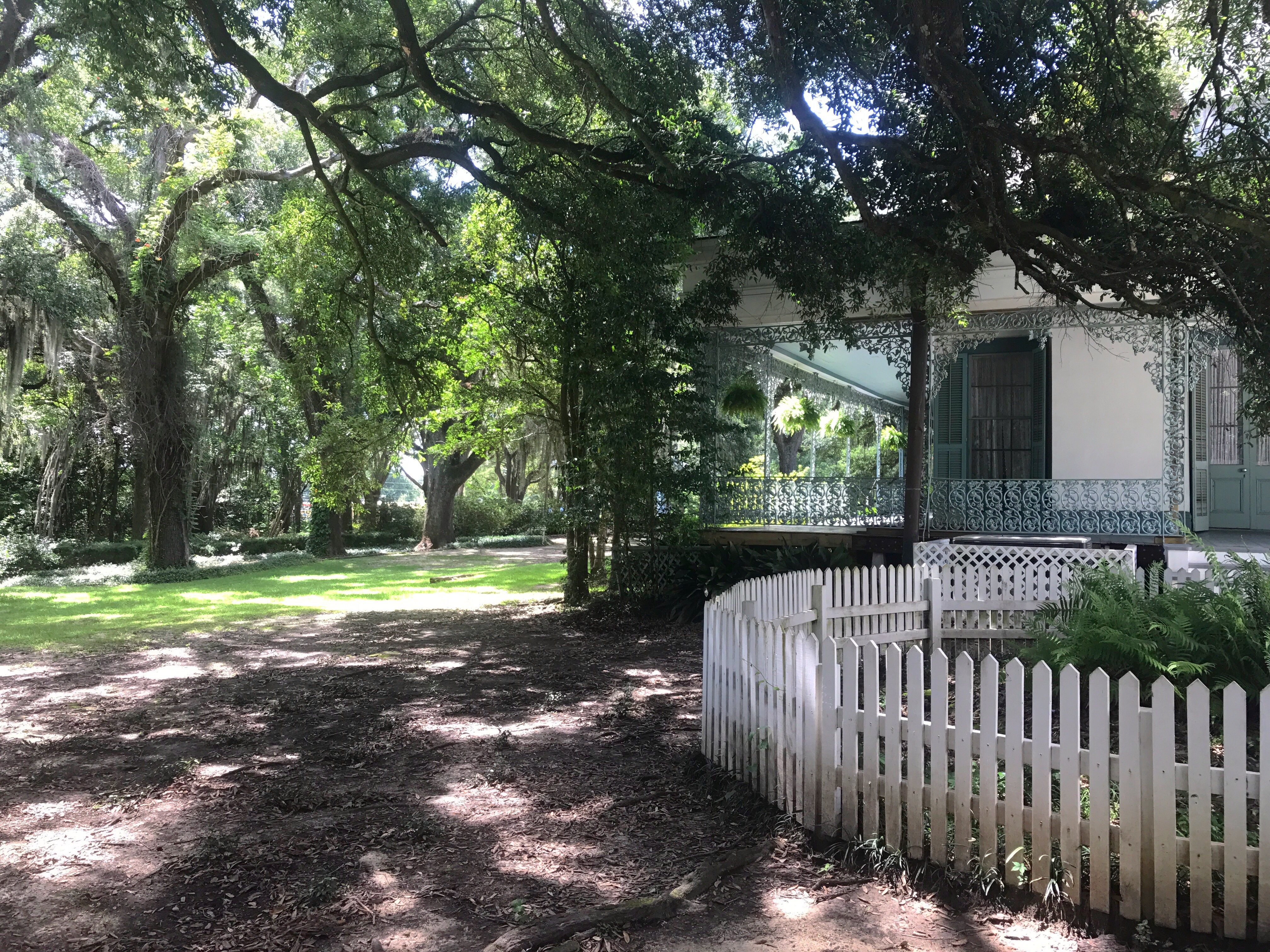 We wanted to explore the property before it got too dark. I don’t know what Emily felt on that initial walk (we separated for objectivity) but I couldn’t block out the past.  It must be the same at Auschwitz or Ground Zero or any other place where history hides its face in shame. And it has nothing to do with ‘ghosts.’

I can’t walk on an old plantation and not think of slaves. Especially the children. And it made me feel gross and consumer-y seeing their old quarters spit-shined into little cabins. Porches lined with rocking chairs overlooking a pond full of screaming frogs.

But was it HAUNTED?

I did some research before we left.

Whereas the Myrtles sustains its reputation on a VERY compelling photo of “Chloe” and her illicit relationship with owner Clarke Woodruff, there’s no actual record of Chloe having existed. —At least no written proof.

The story goes that Clarke Woodruff forced young slave Chloe to be his concubine; and that one day he caught her eavesdropping, so he cut off her ear. Chloe took revenge by mixing deadly oleander into a birthday cake, killing Mrs. Woodruff and her children and BOOM! the place is haunted.

But here’s the deal.

Sara Woodruff (fact) and her adult children (fact) died of yellow fever in 1823 and 1824. So the “Chloe” story, whereas super fun to tell around a campfire and on tours at 15 bucks a pop —-is false.

So who is this ghost in the famous photo? 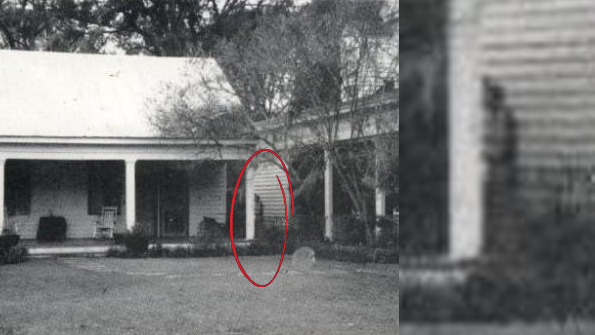 Is it really a ghost?

I believe it is.

And what about this pic? 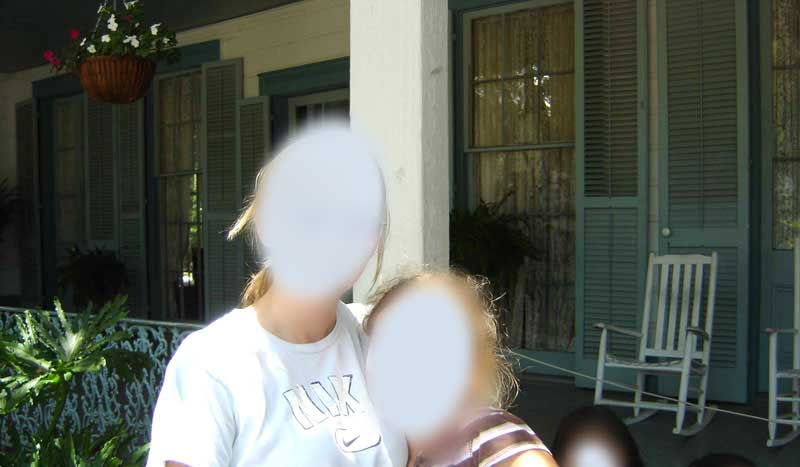 If these photos are legit —and I think they are— then something’s wandering this property.

Emily and I walked beneath mossy oaks, quiet and thoughtful because old trees have seen a lot and deserve respect. But also because that feeling I described earlier. Like the house and grounds are living, breathing entities and you wanna tread lightly so as not to disturb. 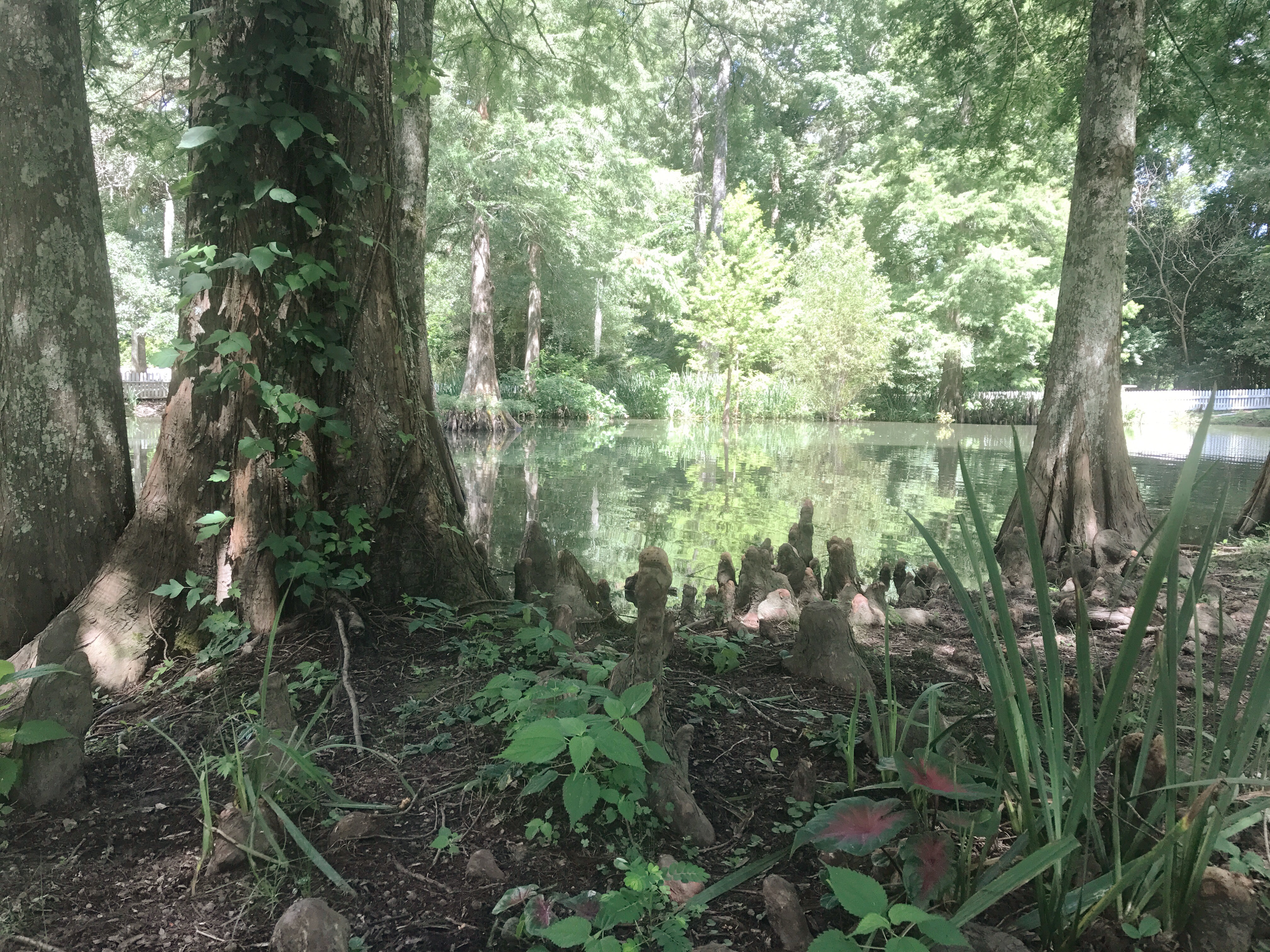 So we took photos. Slapped mosquitos.

I found a penny and put it in my pocket.

And then it got dark.

So now about the room.

Apart from a mutual feeling we needed to keep it tidy, there were no overt signs of spirit. Still, we took showers, prayed, and meditated to get our minds right, then headed to the patio for our own private happy hour. 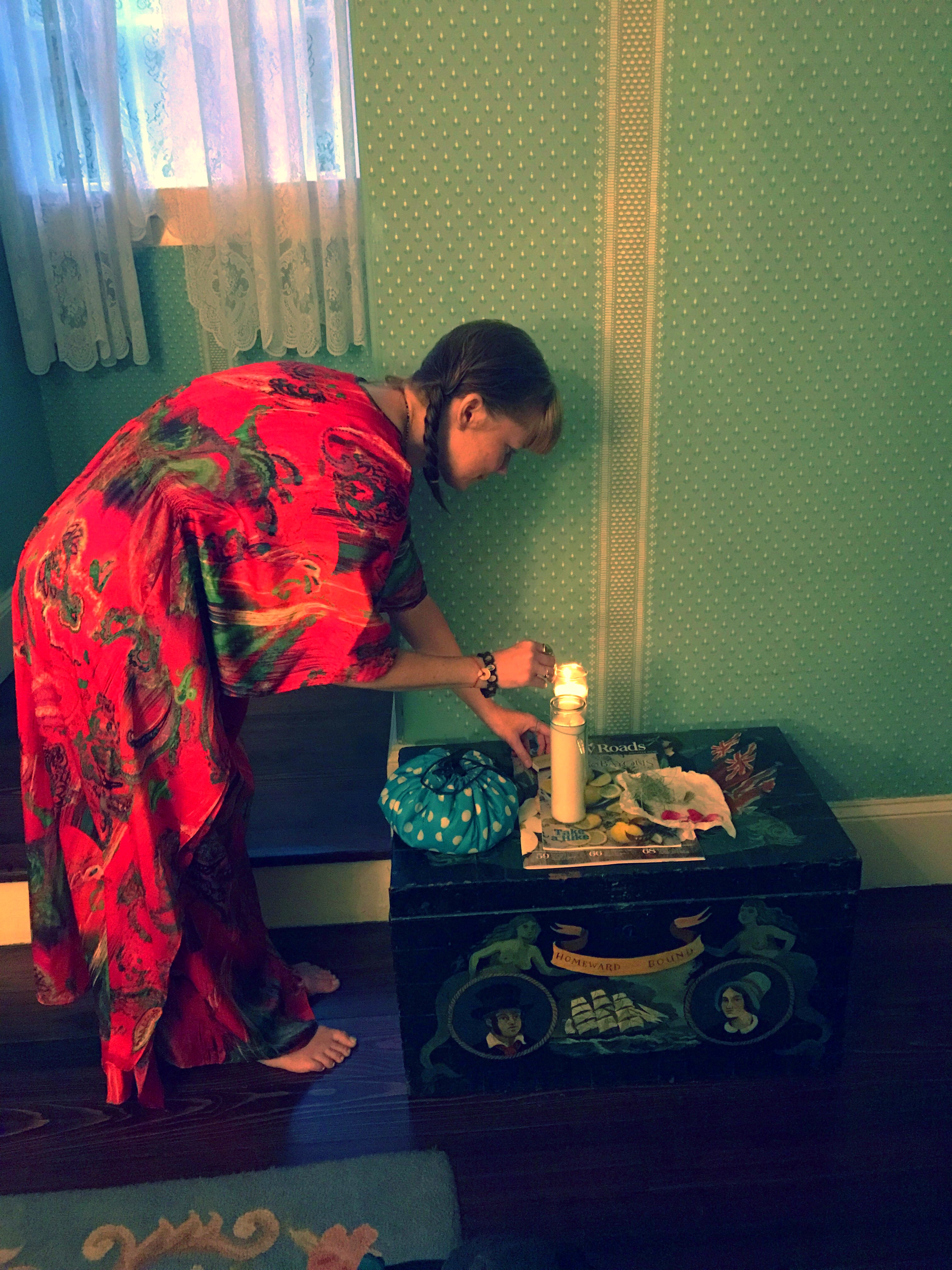 And let me tell you.

Sitting under a bright moon with a dear friend drinking bubbly on sacred ground is a special feeling indeed. 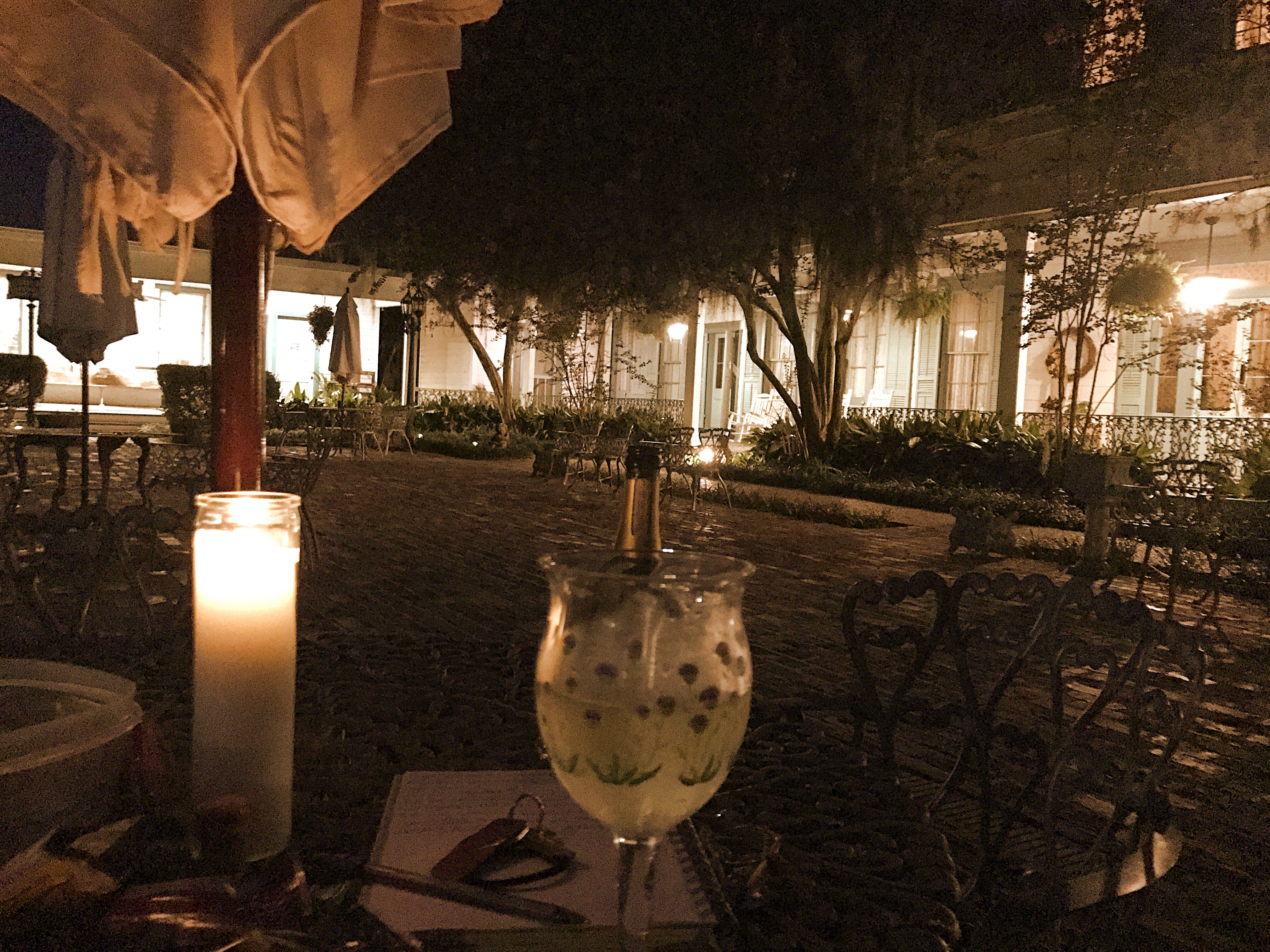 I felt super-privileged holding a room key while drive-by ghost hunters milled around whispering, their camera flashes perforating the night. Particularly busy was the corridor where ‘Chloe’ was captured.

Between the crowds and prosecco, I couldn’t tap into the house.

We talked about books, ghosts, angels, poetry, history, travel, intuition, Louisiana heat, and wondered how our night would go. Finally it was just us, the moon, and a thousand frogs challenging the cicadas to we got spirit, yes we do!

Emily stared at the house.

“I want to go on the porch,” she said, emptying her wine.

The porch was an extremely long wooden wrap-around, and dark as hell.

We grabbed our cameras and ducked under the chains separating the porch from the public. 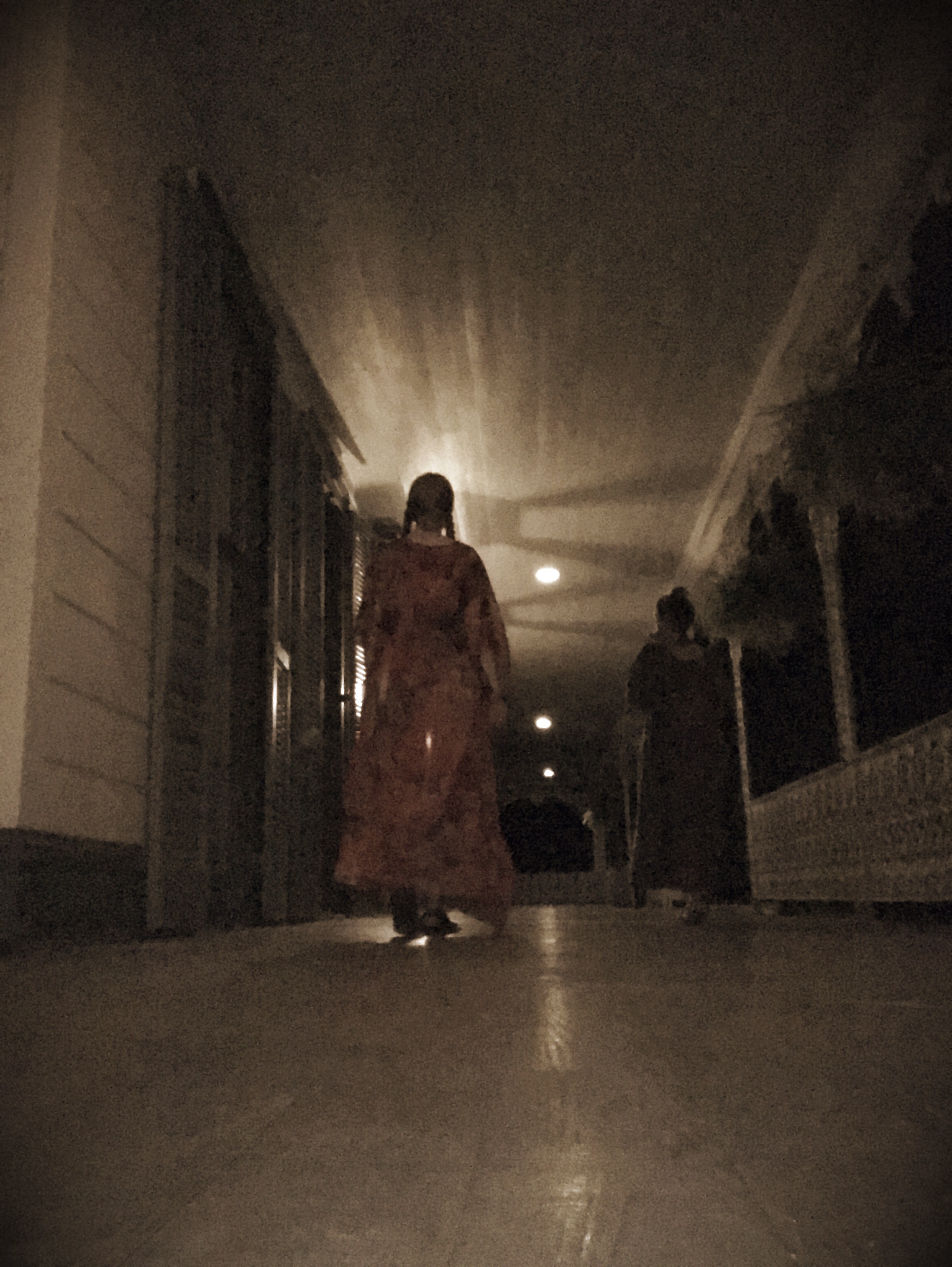 We walked up and down.

Then Emily called me over.

“I feel nothing until I walk by this window,” she said. “This one feels different.”

I met her at the tall window.

It was one of those concentrated energy spots. Nothing major. But she was right. We put our hands on thick glass, smeared with condensation — and both felt a low-level vibration. Maybe like a refrigerator humming but way less than that. And as we stood there acknowledging, I’ll admit the feeling deepened.

Dark furniture outlined a pretty room. If it were a movie, it’d been the perfect time for a face to appear and scare the crap out of us.

I own no fancy ghost-detector equipment. Just intuition, pen and paper.

Please find the two greendots in the following photos. 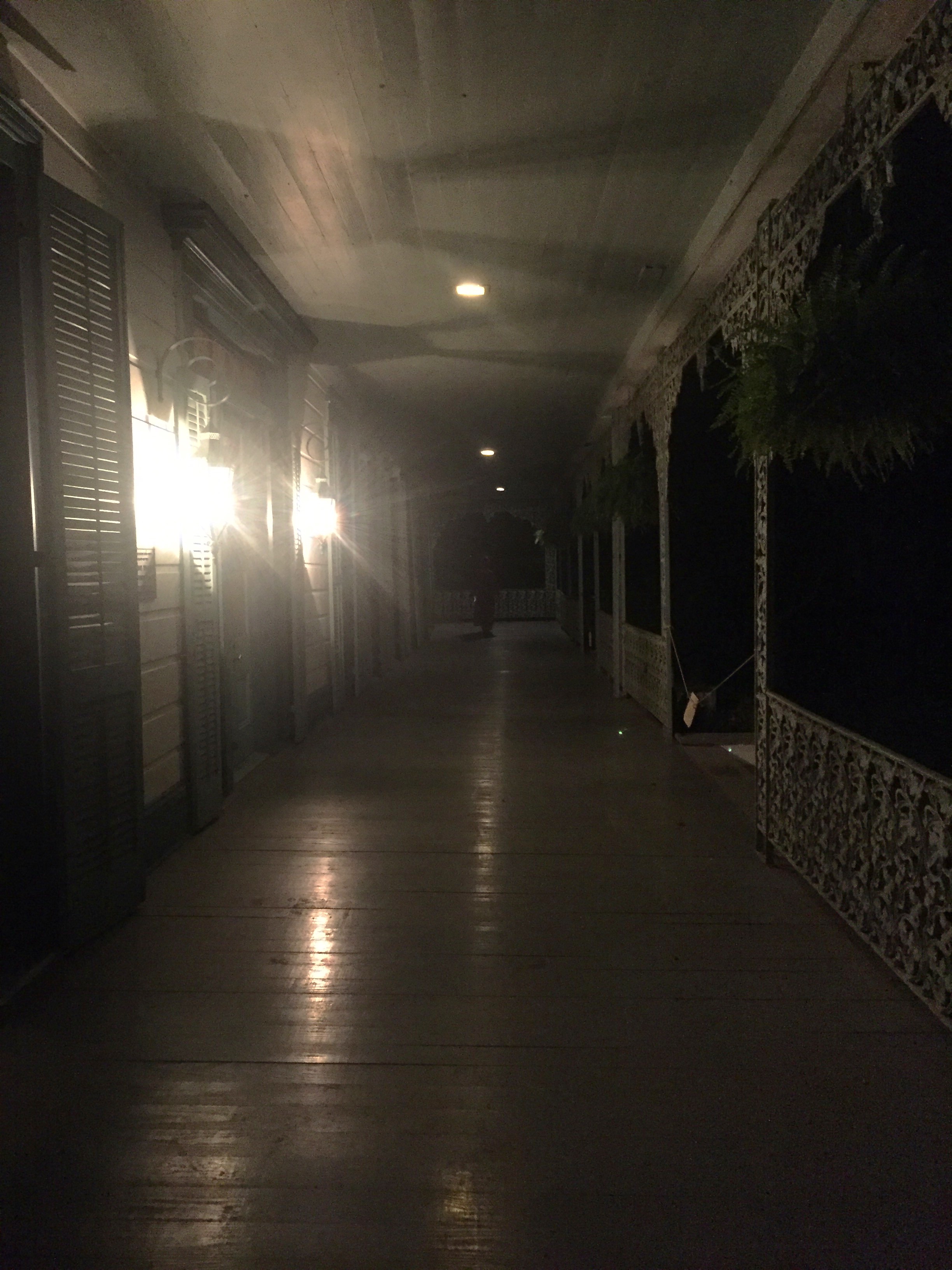 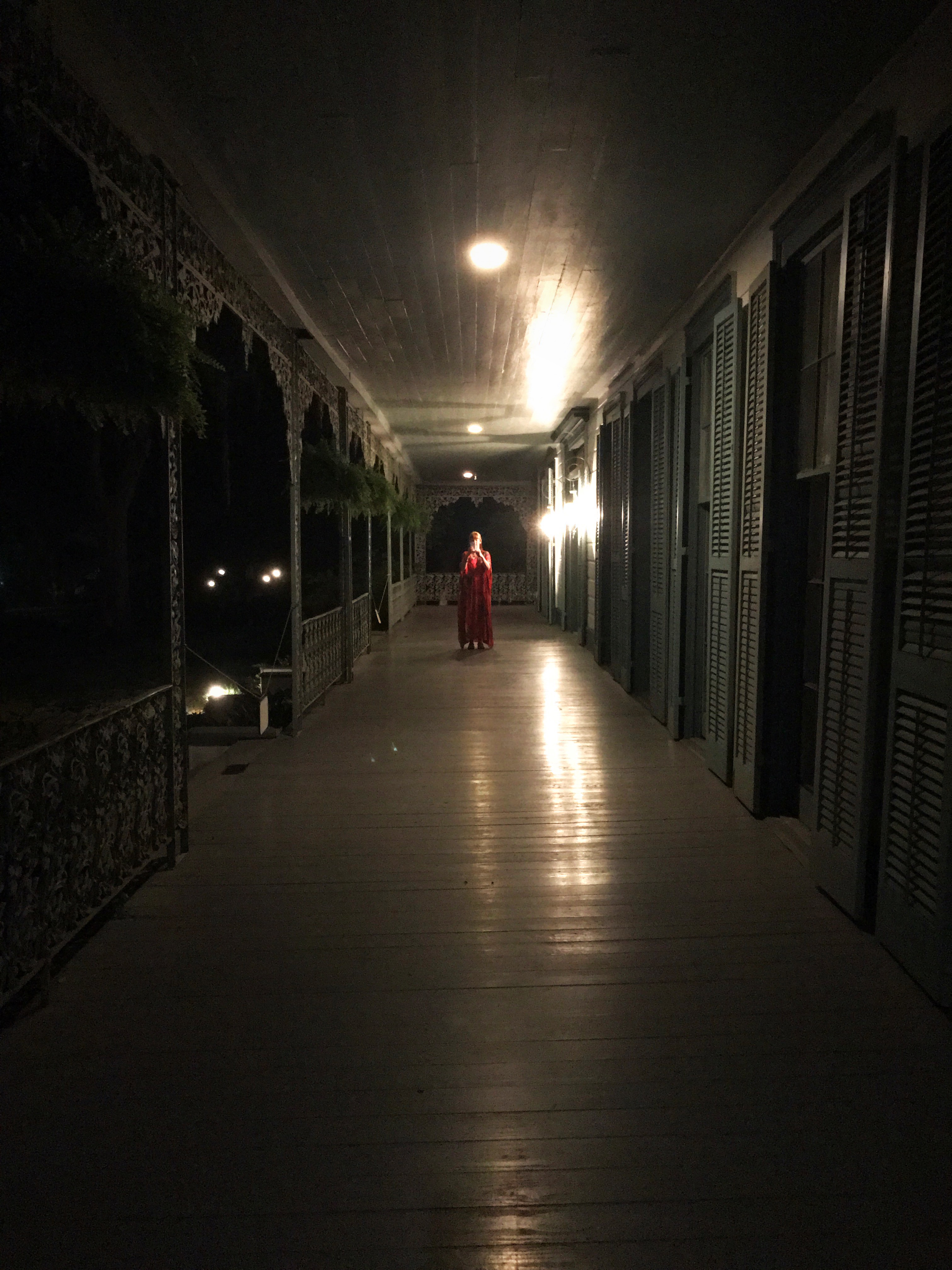 These anomalies are definitely worth a closer look.

Is it reflection from a porch light?

There are dim lights all along the porch. Plus, reflections don’t move.

Is it green light reflecting from the hanging fern?

Is it light catching the bugs?

But I don’t think so.

Please see the ‘orb’ in the left side of this photo.

So is this evidence of a ‘ghost’?

I’m sticking with MAYBE and I want to go back.

Anyway, it was time for bed.

I’m happy to report no dolls moved while we were sleeping. The only disturbance was our drunk-ass foyer neighbors coming in late.

The next morning we took the house tour, where a VERY impressive guide took us room to room, relaying house history and a whole lotta lore.

Here, she emulated Chloe eavesdropping on her master.

And I gotta tell you. I started to feel a little bad for the late Clarke Woodruff. Like, obviously I didn’t know the guy. And maybe he did have his way with a slave.

But maybe he didn’t.

Yet this is his legacy. A child-raping, ear-lobbing philanderer.

I found myself wondering what really happened in those bedrooms. Staring at flaking wallpaper and imported chandeliers, I could almost imagine.

And imagine I did.

Knowing Chloe’s story was mostly made-up, I started adding my own details.

We weren’t allowed to take photos in the main house. But finally we got to the hot spot, the room we peered into last night. And our guide confirmed something:

“Every psychic, every medium who’s ever come to Myrtles says this is the spiritual center of the house.” She opened doors to Mrs. Woodruff’s pretty antique parlor.

We oohed and ahhed at the paintings.  The sewing box. The little writing desk. The petit-point settees.

I hate the word vortex.

But it affirmed our feeling that something was UP with that room.

In summary, I think it’s kind of shitty that Mr. Clarke Woodruff goes down in history as a slave-rapist. I mean, what if he was a super nice guy? What if his wife was the asshole?

Coupled with that note I found at the library, a little voodoo history, and our own Myrtles experience, my story was born.

I finished my first draft of Rosie & June a few weeks later, and insecurity crept in while editing, like maybe I took it a little far and shouldn’t publish. But minutes later (literally), a friend texted me from Half-Price books, where she found a signed copy of MINDER.

I hope you enjoyed Rosie & June Get a Room.

If anyone has theories about the green dots, I’d love to hear them.

As for the Myrtles, I wanna go back and stay in a different room. (You in, Emily?)

Thank you as always for reading.

5 thoughts on “Green Dot Mystery: What REALLY happened at the Myrtles.”

Get thee to a public library!
Cleaned and reorganized my library and now it’s my favorite room in the house. 📚🥰
Sitting in my car like dork, admiring this new nail polish. AND LOVING IT.✨
Book Spine Poetry at the library!
I read. I write. I wear soot spirits.
Awkward pineapple in 3 . . . 2 . . . 1 Does this count as a @secret_buttholes? 👀