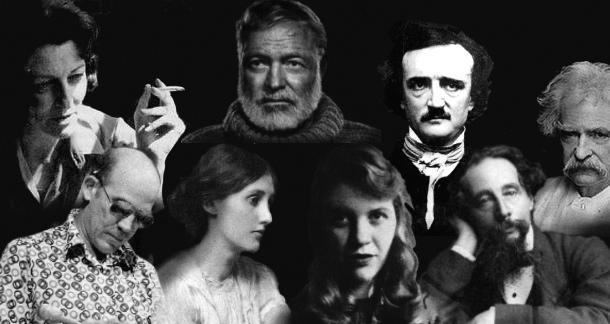 At 20, she overdosed on sleeping pills in her mother’s cellar.

At 30, Sylvia Plath finally killed herself by sticking her head in an oven.

Think about that a second.

One night, she placed wet towels under the doors to keep her babies safe, turned on the gas, crawled in her oven, and died.

What’s up with this sad crap.

This is BOOK LAB. Not Oprah’s Book Club.

We conduct reading experiments and write about them.

Why do we only talk about it behind closed doors at 100 bucks an hour?

Shall we make a long list of people gone too soon?

But people often use drugs and alcohol to quiet their screaming minds –thus ensues addiction, which — let’s face it– has a 50% chance of ending well.

Every person reading knows someone with crippling anxiety, mood or panic disorders. Someone addicted, depressed or bi-polar. Someone who committed suicide.

They say suicide is a coward’s way out.

I dunno. Selfish, maybe. But not cowardly.

I think it takes a lot of freaking courage to stick your head in an oven with two beautiful, babies sleeping upstairs.

Am I being flippant? God, no.

Depression and addiction run in my family.

I am privy to their quiet destruction and live in reverent fear of my own DNA. I am also a writer and extremely empathetic to the curses therein. But this isn’t about me. It’s about acknowledging this thing no one talks about AND paying respect to some authors who famously suffered and busted out some awesomeness anyway.

So I made it our assignment.

Read a book whose author was mentally ill, addicted, or committed suicide.

Was their real-life suffering evident in the writing, thinly disguised as fiction?

That’s what I wanted to find out.

Out of respect for these authors, I hope you’ll read on. 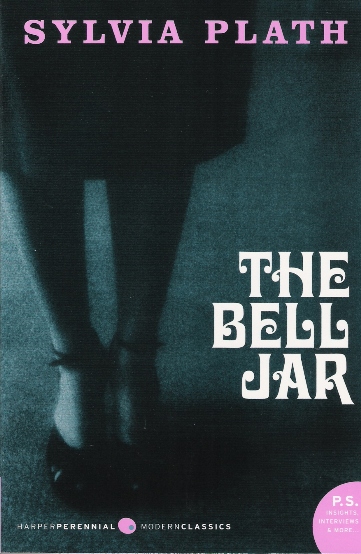 I chose The Bell Jar for no other reason except that Plath appears on every ‘famous suicide’ list, and this is her great novel.

Was Plath’s depression evident in her work?

The Bell Jar was blatantly autobiographical. So much, it was published under a pseudonym in England only. Her family –namely her mother — fought its American publication and The Bell Jar didn’t hit American bookshelves until 9 years after her death.

The book– basically about a talented, young writer slipping into insanity– blew me away. I was worried it would be depressing. But mostly I found it REAL and strangely refreshing? By page 3, I knew I was going to love it. There were SO many delicious little neurotic passages, I had trouble picking just one to share at Book Lab.

That morning, I had tried to hang myself. I had taken the silk cord of my mother’s yellow bathrobe as soon as she left for work, and, in the amber shade of the bedroom, fashioned it into a knot that slipped up and down on itself. It took me a long time to do this, because I was poor at knots and had no idea how to make a proper one. Then I hunted around for a place to attach the rope. The trouble was, our house had the wrong kind of ceilings. The ceilings were low, white and smoothly plastered, without a light fixture or a wood beam in sight.

Sylvia, I respect and salute you, girl.

I give The Bell Jar 5 stars and promptly put it on Staff Picks at the library. 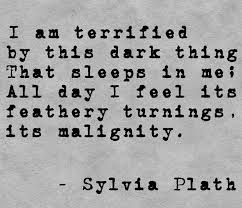 He gave us Blade Runner, The Minority Report, and Total Recall.

In fact, his novels and short stories are the most adapted sci-fi classics in recent film history.

This is Philip K. Dick.

And poor Nedra had to call him PKD so as not to illicit giggles. For all our intellectual pomp, we really are perverted 12 year olds. At least I am.

PKD was plagued by vertigo as a teen.There were also signs of schizophrenia and eventually, visual and auditory hallucinations, likely caused by drug addiction. He managed to keep writing even though hospitalized. And at one point described a “beam of pink light being transmitted directly into his consciousness” and believed this light a spiritual force which granted him access to esoteric knowledge.

Nedra chose this author because he’s universally regarded as a badass.

A Scanner Darkly is about an undercover narcotics agent who finds himself addicted to the very drug he’s trying to eradicate.

“I chose this book because it was less sci-fi than his others, about this agent going undercover and eventually losing his identity to drug addiction.”

“It was confusing to be honest. The main character plays two parts, split between two worlds, so it was hard to tell who was talking — which may’ve been the point. But Dick’s drug use is very evident in this book. I’ll also say his author note makes me want to read the book again.”

Drug misuse is not a disease. It is a decision. Like the decision to step out of a moving car. You would call that not a disease but an error in judgement. When a begin to do it, it is a social error. A lifestyle. In this particular lifestyle, the motto is “Be happy now because tomorrow you are dying.” But the dying begins almost at once, and the happiness is a memory. —– Philip K. Dick

Dick was found unconscious on his floor and died five days later, having suffered multiple strokes. He was 53.

Tolstoy was born wealthy and lost his parents at a very young age. He suffered clinical depression, which worsened as he aged. Reportedly obsessed with death, he was critical of himself for not having the courage to commit suicide. He wrote in one letter, “The possibility of killing himself has been given to man, and therefore he may kill himself.”

Let me just go ahead and publicly admit I’m a super big chicken-weenie when it comes to Russian literature.

I imagine the likes of  Anna Karenina and War and Peace heavy tomes of depressing, icy darkness and always impressed when people read them on purpose.

But Petra really enjoyed her books.

The Death of Ivan Ilych and The Cossacks.

The Cossacks is about a wealthy, young Muscovite who joins the Russian army in search of a more authentic life.

“Tolstoy wrote it in his 30s when he was still okay. It was autobiographical in that it was about a guy tired of society life,” Petra explained. “But The Death of Ivan Ilych, he wrote in his 50s. By then he was critically depressed and obsessed with death, which to me, was apparent in this book.”

The Death of Ivan Ilych is one man’s profound reflections on life when faced with his own mortality. It was written during Tolstoy’s spiritual crisis — the nine year period following the publication of Anna Karenina — which saw him give up meat, hunting and smoking, give away his copyrights, denounce his earlier writings as immoral, and embrace Christianity.

The Death of Ivan Ilych is considered a masterpiece on the subject of death and dying.

“I feel like writers are hyper-aware of everything around them,” noted Petra. “Every little thing is stimulus. It must be overwhelming.”

Our next author ran a garden hose from an exhaust pipe through his car window and died, aged 31.

An envelope marked TO MY PARENTS  was discovered in the car, the enclosed note later destroyed by his mother, who never divulged its contents.

His mother also found an unpublished manuscript atop an armoire in his room.

That manuscript — sent to various agents over the next five years — eventually won The Pulitzer Prize.

This is John Kennedy Toole, most famous for A Confederacy of Dunces, posthumously awarded the Pulitzer Prize for Literature in 1981.

Emily had already read (and loved) Dunces. So she chose Toole’s only other novel, The Neon Bible,  written for a literary contest at the tender age of 16 (!) 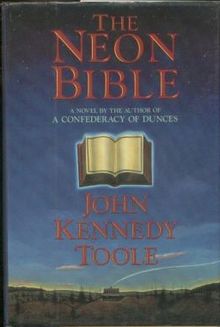 The Neon Bible tells the story of David, a young boy growing up in rural Mississippi in the 1940s. Readers share his awkward, painful encounter with first love and meet his pious, bigoted townspeople.

“It’s kinda Southern Gothic, about quiet people dealing with isolation in a small town,” said Emily. “I definitely felt evidence of the author’s sense of loneliness. And the book ironically ends with a bang.” 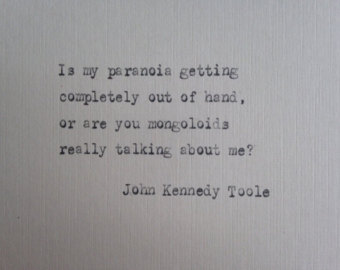 Raise your hand if you read Slaughterhouse Five in high school.

Kurt Vonnegut died at 84 from head injuries sustained in a fall.

He had a grandfatherly reputation. But he suffered depression, PTSD, shocking fits of rage and temper, and also attempted suicide.

Vonnegut witnessed MUCH tragedy in his personal life.

His mother committed suicide on Mother’s Day, for example. That same year, Vonnegut was captured by Nazis during the Battle of the Bulge and sent to Dresden as a prisoner of war, whose job it was to collect and burn bodies.

This ordeal continually popped up in his work, most notably in the book that made him famous. 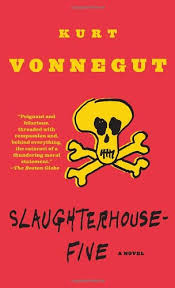 “My high school English class was divided in two,” said Anna. “Half read Slaughterhouse-Five and the other, a Brave New World. I was the Brave New World group, but distinctly remember the discussions about Vonnegut. That’s why I chose this book.”

“I don’t know how he managed to combine war, spaceships, aliens, and time travel. But he did,” she laughs. “Knowing what he suffered at Dresden, I really did feel his deep well of despair. This book was very well done.”

F. Scott Fitzgerald, alongside wife Zelda, are THE poster children for glittering excess in the Roaring Twenties. In their Paris years, he and Zelda were drunk for days at at time, their lives a gilded blur of manuscripts and champagne, fueled by ego, and funded by Gatsby.

Tecla (our celebrity guest this round) openly admits she never liked The Great Gatsby.

“I tried and tried and tried to love that book. I gave it so many chances. But I just couldn’t finish it! Still. I wanted to see what I was missing. So I decided to try Tender is the Night, which took him TEN years to write.”

Tender is the Night is the tragic love story of a stylish American couple.

“The husband is a brilliant psychiatrist, and his beautiful wife lives in an asylum. The main character spends a lot of time writing letters trying to make people understand what they’re going through. Zelda was institutionalized in Switzerland at the time, so the story directly reflects the Fitzgeralds’ downward spiral. Also, he wrote it on stimulants.”

“I did. But I could only read it in small doses because it read like a 1920s movie. Still, I’d recommend it.”

Tender is the Night: 4 stars.

At the time of his death, Fitzgerald was reportedly drinking several pints of gin a day.

He suffered an alcohol-related heart attack in 1940, and died believing himself a failure.

Zelda perished in a fire 8 years later, locked in a room in her asylum.

And so it goes.

Mental illness is a silent creeper.

I’m of the mind we’re all in this together.