I must share something quite awesome that happened two years ago. Many will read this and say “what a lovely coincidence” but I don’t believe in coincidence and this stuff happens way too often on Planet Jennifer. So January 18th, two years ago, I’m sitting at work and a strange thought popped in my head.

Go buy a scratch off.

It was loud enough to make me stop what I was doing and look around. (I’m not a gambler and this isn’t something that would ever flow through my subconscious whilst sober, you see.) I nudged my friend Sara.

“I think I’m supposed to buy a scratch off.”

She grabbed her purse.

“Let’s go,” she stood, grabbing mine too. Sara likes to gamble.

So we got in her car and started driving around, vibing for the right store. “Just go to the nearest one,” I shrugged. And a few minutes later, we pulled into a gas station and walked inside.

Right away I knew we weren’t in the right store. Its sorta hard to recall details now but I remember a physical coldness… not like temperature, but an energetic frigidity that didn’t invite me to stay (if that makes sense.)

“I don’t mind if you don’t,” Sara shrugged. She’s good like that.

“Well there’s another one down the road,” I pointed. So we drove to another store, parked, and went in. The door jingled. The store was small, kinda dirty, and smelled like Nag Champa. A warmness spread over my right side, like a tingly pull.

“This is the right store,” I whispered.

“Hello,” we smiled back, shuffling to the scratch-off counter in tandem. The plexiglass was dirty and scratched. The proprietor watched us carefully. It felt like I was up to no good. I have vices, see, but gambling isn’t one of them. Sara, on the other hand was very excited and full of advice. “Whatever you do, don’t buy one of each. It’s better to buy a few in succession.”

“But which ones?” I eyeballed the selection. There were so many! And some of them were really expensive!

There it was again. What the hell!

“Did you hear that?”

“Just trying to figure out which ones to buy,” I smiled, wishing the voice would say buy THAT one.There were SO many. And my eyes kept settling on the $2 ones.

Get the black one.

“You don’t hear that?” I whispered to Sara. A warmth spread over me, all six senses on high alert. My eyes found the black one. It was $10.

Sara nudged me in the side, smiling nervously at the Indian gentleman. He was looking at me funny.

We gave the guy our money and walked outside, hugging our scratch offs. “I can’t believe I just spent $20 on this crap.”

“Oh it’s fun. Let’s go eat cheeseburgers and see what we won! I’ll treat you for your birthday.”

Sara’s good like that, too. So we tucked into a booth with cheeseburgers, french fries, and pulled out our dimes. I think dimes are the luckiest coin for various reasons we can talk about later.

“I think I’m gonna win.” I scratched with enthusiasm. Something really was urging me on.

We scratched little gray shavings all over the table.

“As long as I get my money back,” I wiped my card, pleased to see a tiny return on my first $2 tickets.

“You’ll do better than that,” Sara affirmed.

We took bites of our cheeseburgers and kept on scraping.

“I wonder who told me to buy these tickets.” I dipped a fry in mayo. “This wasn’t my idea.”

“I think it’s your grandfather,” she said, blowing at scrapings then frowning at her ticket. She wasn’t winning like I was. “I think he wanted to give you a birthday present.”

“Yes,” I answered, scratching the last number on my $10 ticket. I could hardly believe it. There were several games on that one card and I’d won nearly all of them.

“How much did you get?” she asked.

I counted the winnings then counted again. Seriously? I stared at Sara wide-eyed. The loving presence amplified, filling our booth like an invisible hug.

“How much?” she asked again.

I shoved the cards her way because I was too busy welling up. I still don’t know whose voice it was. But I knew it was my birthday.

…..and here we are again. A beautiful cold January morning. I’m still in bed with no plans for the day….but I’m listening. 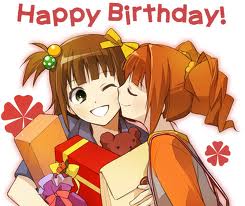